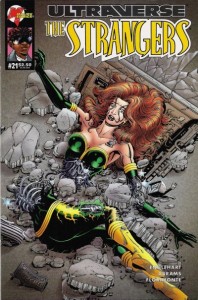 One of the most interesting characters in the Ultraverse was the heroine known as Electrocute, one of the founding members of The Strangers. A gynoid (female android) named Candy by her creators, she was designed to be a sex toy for men. She was gorgeous and programmed to be completely submissive to the men who used her.

That all changed after the Jumpstart event.

Suddenly granted sentience, Candy now struggles to understand who and what she is. Basically, you have the classic Tin Man or Data storyline tropes, only with the added weight of sex roles, gender equality and notions of power thrown into the mix. What you initially think you’re getting from the character is continually turned on its head — her codename is deliberately “cutesy” and in the very first issue, she runs around in lingerie the entire time. But when you see past the visuals, you realize that she’s just as scared and confused as the rest of the team, if not more so.

As the series progresses, we see Candy enter into her first real romantic relationship (with her teammate, Grenade) and continually struggle to find out who she really is.

I’m not going to claim that the creative team always hit the mark with the character. Englehart occasionally took an awkward turn with Candy and often the storyline was a bit too heavy-handed but I think you have to give him props for what he was trying to do. In an era of ” bad girls,” he took what could have been a throwaway hyper-sexualized character and spent a lot of time giving her depth and emotion.

Our powerful image today is courtesy of artist Rick Hoberg and adorned the cover of The Strangers # 21.

One Reply to “More Than Just Eye Candy”