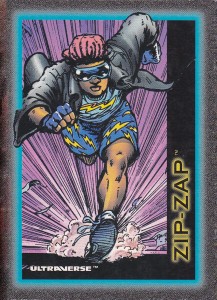 The Strangers boasted a very eclectic cast and several of them are very “Nineties” in their presentation… and Leon Balford is perhaps the epitome of that. An urban kid, Leon was pressured by bullies and gang members on an almost daily basis. When The Jumpstart gave him superspeed, he was finally able to claim a measure of independence in his life. Rather than running away from his problems, he chose to run directly at them… at full speed, sometimes without giving proper thought about how he was going to handle them!

I appreciate this character because it really represents Steve Englehart’s inclusiveness. Throughout his work, he always used characters of different cultures, ethnicity and sexual orientations. Now, many times he wasn’t very subtle in how he did so but given the times he was writing in and the fact that in many cases, he was pushing the boundaries farther than anyone in mainstream comics had before him, I think he can be forgiven for utilizing what (to our modern eyes) would be seen as stereotypes.

With Leon, everything screams Nineties. From the way he dresses to the codename Zip-Zap to the way he references then-modern celebrities, Leon is definitely a product of his time. If the Ultraverse were revived, I wonder how he’d be treated now — I think he’d have to be updated in appearance but maybe he’d be seen as “retro” or “old-school” and all would be fine.

A word about Leon’s dialogue… he used street slang very often and some of it was painfully awkward. It really did seem like an older guy trying to be “hip” and failing in his writing. Then again, I wasn’t living on the mean streets of San Francisco at the time so maybe someone did talk the way Zip-Zap did?