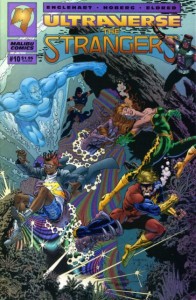 The Strangers # 10
“The Door To Doom!”
Written by Steve Englehart
Art by Rick Hoberg and Tim Eldred
Edited by Roland Mann

This issue starts off with a really fun cover as The Strangers are engaged in undersea combat with some sort of demon that’s partially emerged from a rift of some kind. At first glance, it’s kind of confusing as to where they are and what’s going on but I find myself spending a lot of time looking at it and it’s got some definite energy so I give it a thumb’s up.

Story-wise, the team has finally found the coordinates that Yrial gave them and they end up traveling through a rift into another dimension — one inhabited by a demon king named Bastinado. Bastinado has a peculiar way of talking that’s amusing but it also sort of undercuts the threat we’re supposed to be feeling. Here’s some examples: “Bastinado! Bastinado me! you t’ink Bastinado foolish — Bastinado no speak your words good!” Honestly, Bastinado, you speak English as well as some folks that I know around here. You’re fine, really.

After an epic battle, Atom Bob steps up to the plate and kicks Bastinado’s ass, pretty much single-handedly. The team then departs, having learned some powerful secrets about Yrial’s people that they believe will help convince the chief to let her go… or else they’ll spill the beans about what they know.

If it sounds like I’m giving the plot short thrift, it’s because I am.

I want to talk about something very specific here — in the previous issues we’ve seen Bob struggling with his role on the team. Is he a leader? He’s clashed a bit with Elena because while people naturally gravitate to Bob, she’s the one with the actual experience running groups. In this issue, she saves his life at one point, leading to a bruised ego on his part.

And that leads to something else we’ve seen from Bob — a desperate need to prove himself, not just as a hero but as a man. He’s tried and failed to impress Choice, Electrocute and Elena. While the implication is that Elena and Bob may have gotten physical between last issue and this one, he still feels like he’s a failure in her eyes. He wants to show everyone that he’s strong, capable and potent. In the battle with Bastinado, we see Bob’s power really come to the fore and he looks almost demonic in battle, with his eyes glowing red and with him shouting his name, demanding that everyone take note of him.

I generally try to stay away from spoilers for later in the series, instead pretending that we’re all reading these books for the first time as I review them. But all of these story points really come to fruition down the line and it’s worth noting that Englehart has planted these seeds early on. It’s a remarkable bit of plotting and character building.

Art-wise, things are very strong here. I liked the demons and any time Hoberg gets to draw Elena in a swimsuit is fine by me. There’s a nice shot of several team members in their costume that’s almost pin-up worthy, as well.

At the back of the book is a tribute to Jack Kirby, with remembrances from various people in the Ultraverse family. Well worth checking out.

Another great issue – the book has definitely hit its stride!