Here is how it was listed on Jerome’s deviantART page:

Okay! Because color seems to have the greatest appeal to viewers online, I’m pleased to present this version of a piece I did ages ago, as digitally colored by the great Albert Calleros.

Many years back, when Malibu Comics was in existence out here in Southern California, my buddy Hank Kanalz was an editor there, on the rise at only twelve years of age (NOW, Hank’s a Grand High Mucketty-Muck for DC Comics, hangin’ out with stars and power-brokers like Jim Lee and such, and he’s only seventeen years of age.). Anyway, MISTER Kanalz gave me the assignment of designing art for a company ad featuring a character called Rafferty. Rafferty was a formidable villain, a killer who uses a nasty-looking foot-long blade, with a spiked hand-guard. This guy was going to appear in several Malibu titles, wreaking some serious mayhem. The idea was to tease fans about which of their favorite heroes might be getting killed off. The titles involved were SLUDGE (Hi, Aaron Lopresti!), WARSTRIKE, FREEX (Hey, Ben Herrera!), NIGHTMAN, and PRIME (Howdy, Norm Breyfogle!).

I decided to go with individual panels depicting each book’s characters in close-up, all unaware of the deadly danger awaiting them. Rafferty is featured prominently, having cut a huge slash through all of the hero panels, the slash directing the viewer’s eye through all the panels, and back to Rafferty himself. Some of the panels drip at the bottom, and there’s blood spattered here and there. I submitted this concept, Hank approved the sketch, and this was the final result. I personally requested Albert for the task of coloring the piece, and I think he did a fantastic job! I hope you like it! Cheers!

I was recently on vacation in Portland, Oregon and happened to visit Bridge City Comics. Surprisingly, I found this in their dollar bin! Malibu Sun #26 from June 1993 promoting the Ultraverse launch with info and interviews! Been wanting this forever and found it on the same day we announced this Ultraverse Network! Must have been fate!! 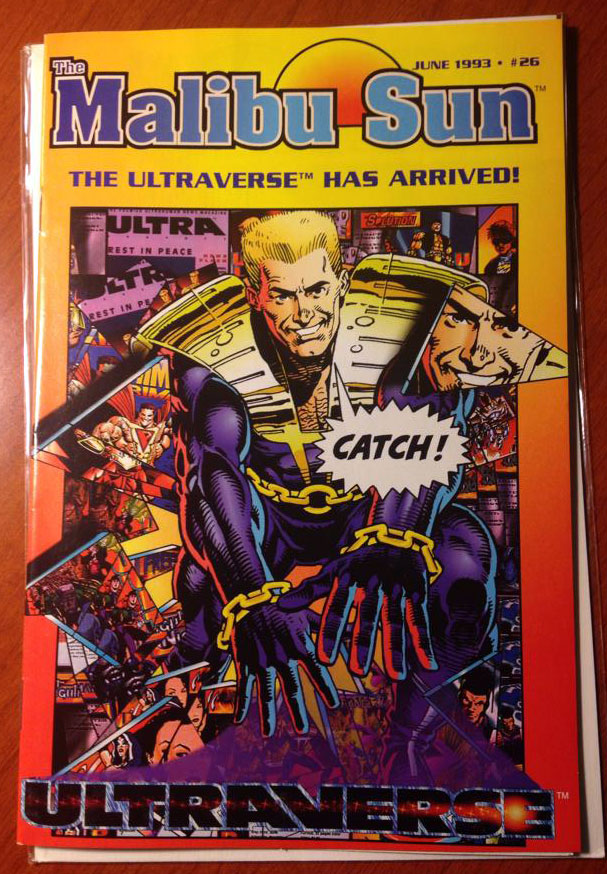