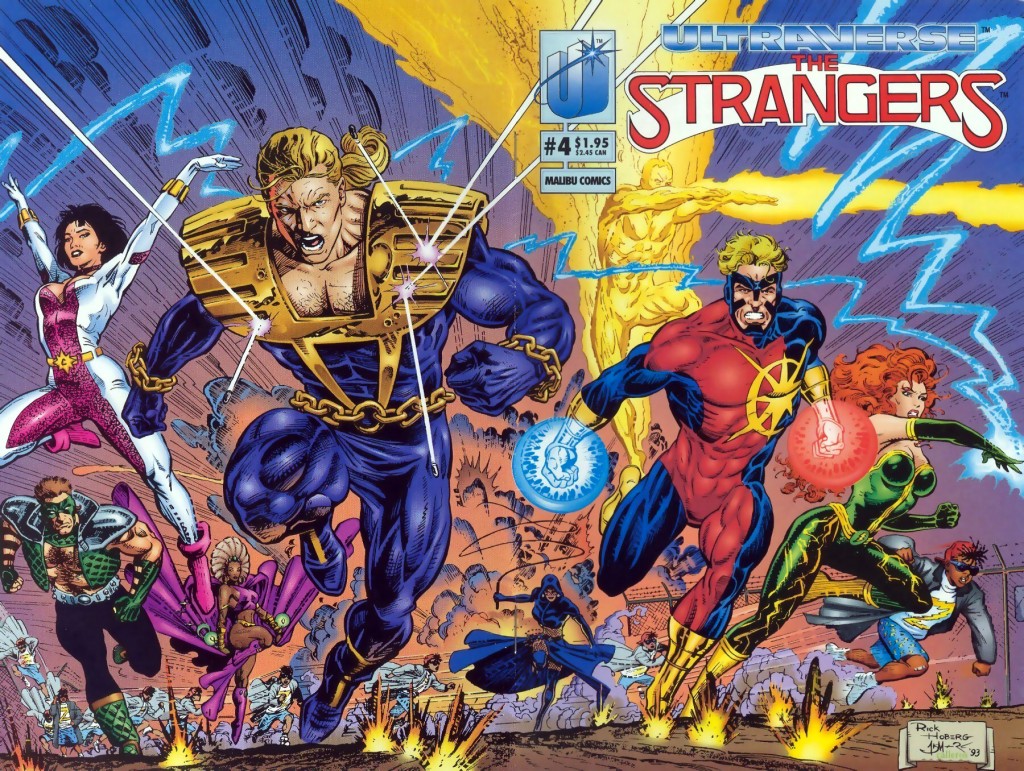 When last we left our heroes, The Strangers had dropped in on Hardcase, demanding in no uncertain terms that the time had come for a teamup! When we rejoin them, we find that our heroes (along with Hardcase and his partner Choice) are prisoners of Aladdin. We discover that Aladdin has the means to hold Ultras against their will and aren’t afraid to use those techniques — and they’ve gone even father than that. Using DNA salvaged from the dead members of The Squad, they’ve actually used the powers of Hardcase’s dead friends to come up with new weapons and systems. This doesn’t sit well with Hardcase for obvious reasons.

Meanwhile, Yrial continues to struggle with her place on the team and we see the beginnings of a potential romance between Atom Bob and Choice… one that reveals a number of self-doubts in Bob. These will take on new importance later in the series but we’re getting ahead of ourselves.

Sam Grandee, the gripman on the cable car that was hit by the Jumpstart effect, shows up — he’s now The Grip and is working for Aladdin. Steve Englehart raises some racial issues when he as Dirt Devil (another Aladdin operative) whispering “That boy’s great-grandpappy would’a made a helluva slave, Foxfire!” While I always appreciated that Englehart didn’t shy away from such subjects, there were times (like this one) when he did it with all the subtlety of a sledgehammer.

Grenade and Hardcase use their powers in an inventive way to get past the prison they’re being held in and the team begins exploring Aladdin’s secret base. Along the way, we get lots of character bits and Engleheart moves forward the subplots regarding Lady Killer’s growing appreciation of her teammates, Zip-Zap’s feelings about his place on the squad and the love affair between Grenade and Electrocute.

After a big battle with the powered forces of Aladdin, both sides agree to a truce. Bob makes the stipulation that any attack on Hardcase and Choice would be seen by The Strangers as an attack on the entire group. In the end, Hardcase turns down a chance to join the team and everyone parts as friends.

First off, let me say that the wraparound cover is GORGEOUS and easily one of the best in the entire run. I always had a fondness for that weird outfit that Choice wore and Hoberg depicts her quite well, as he does with all the ladies.

Story-wise… this has some great character-building moments and the action is interesting enough but in the end, it felt like not a lot actually happened. Aladdin is kinda bad? Well, we knew that… Hardcase can be a bit of a jerk sometimes? Yeah, knew that. The Strangers go their way and Aladdin keeps conducting awful research on Ultras. Hmm.

Having said that, I generally enjoyed this issue. It really felt like the old Marvel issues where heroes would team up, move past their differences and then save the day.