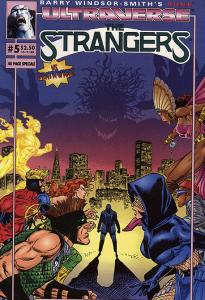 This issue features some of my favorite moments from the early Strangers run. With the team finally taking some time to re-establish their personal lives, we get to see our heroes away from one another, hanging out with family and friends. It was a really needed set of moments because the first four issues moved at a breakneck speed. By today’s standards, this issue gallops along but at the time, it was very much a “breather” issue, even with the big action at the back half of the book. In fact, I would have been okay if Englehart had used a “day in the life approach” and not had a big villain in this issue at all — just give us more of the characters being who they are.

The issue begins with the team splitting up. Bob goes home to visit his parents and we find out that his newfound celebrity has really changed things – women who ignored him before are calling him up and the media is camped outside his parents’ residence. Leon returns to the mean streets and teaches a lesson to the gangbangers who tormented him in the past. While it wasn’t the most mature thing to do with his powers, it perfectly fit with his age and felt very real. Hugh and Candy talk about his past (he was a “famous” high school quarterback) and the two of them briefly fight about the nature of their relationship before they make up. As Hugh says to the reader, “I’m confused! You must be a real woman–!” Ah, Englehart, you slay me. Elena continues to be my favorite character, working to further the team’s public relations position while Yrial is the one who uncovers the threat of Deathwish, who turns out to be another survivor of the cable car accident from issue one.

But before we get there… David tries to use his healing powers on a friend who’s dying of AIDS. Like with Leon, this scene really worked because these are the kinds of things that real people would do with superpowers. The outcome isn’t a good one, though, and it reminds the entire team that their newfound powers don’t make them gods… they have limitations.

The Strangers come together to face Deathwish, who’s killed everyone on his city block. After a quick debriefing with Captain Jacob Rome (San Fran’s official Ultra liaison as of Freex # 2), our heroes come face-to-face with Deathwish, a scary-huge villain who says things like this: “Because it wasn’t Death who touched them! It was far, far worse — the all-consuming lust for oblivion! It was I — Deathwish!”

We find out that Deathwish grew from Bushnell, the old man who was riding the cable car. He’s basically the old man’s sickness given physical form and he’s eager to spread out and infect others with his precious “oblivion.” While the watching cops wonder if this dark individual has any connection to the Night Man (more continuity cross-promotion), David is able to use what he learned in his failed attempt to help his friend to overwhelm Deathwish and (apparently) destroy him. In a somewhat poignant moment , Deathwish proclaims “No! No! Deathwish does not wish to die…”

A really strong issue! Hoberg catches the despair on David’s face and has some cute moments throughout. While the fight ties in to the major character moment of the issue, I still think that the strongest pieces of the story were the earlier ones where we simply got to know them all as people a little bit more. Englehart was always a master at characterization and the series shines the most when he goes that direction.

In bonus material, we get a couple of Rune pages in a flip-book format and an introduction to the Night Man written by Steve Englehart.

Next issue: the long-awaited return of… Deathwish! Wow, that defeat didn’t last long, did it?