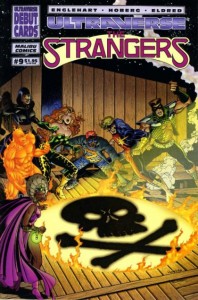 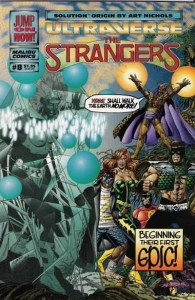 The cover proclaims “Beginning Their First Epic!” which kinda discounts the recently concluded Break-Thru, doesn’t it? Anyway, we start with our heroes returning to Earth and finding a large contingent of media (and military) waiting for them. As Grenade points out, “Stealing J.D. Hunt’s rocket from an air force base will do that for you!”

There’s a nice exchange between Leopold (of Aladdin) and Captain Christopher Dugan. While Aladdin wants The Strangers to come in for questioning, the Captain refuses, claiming that he gave our heroes permission to use the rocket — this is obviously not the case but Dugan feels the world owes The Strangers thanks for their role in defusing the crisis. Awful nice of him, isn’t it?

We also get a conversation between David and Dugan about gays serving in the military. Keep in mind that this was during the Clinton era and the topic of Don’t Ask, Don’t Tell was definitely seeping into the minds of the populace. Englehart’s own views come across pretty clearly, I believe, as Dugan responds to David’s admission of his homosexuality by saying, “We’re not all neanderthals in the service, son! I signed up to protect the country, not worry about its love life! The only way I rate people is by effort on the job!”

It’s interesting to see how far we’ve come on discussions like this in just a couple of decades — by today’s standards, dialogue like this seems very heavy-handed and preachy but at the time, it was a pretty bold declaration.

It’s at this point that Chief Aula shows up and informs Yrial that it’s time to come home — she was assigned to The Strangers to help them learn about their origins and she’s done so. Thus, her mission is over. To everyone’s surprise, Yrial states that she’d like to remain with the group and learn more about their ways but this only proves to the Chief that she’s grown too close to them. Yrial strikes out at her leader but eventually relents, telling her friends to abide by her decision to follow the dictates of her people.

The Strangers, of course, ignore this and fly to Sky Island in hopes of getting her back. They liberate Yrial and she tells them that she’s secretly visited their world many times and grown to appreciate it. After a terrific battle between Sky Island’s inhabitants and The Strangers, Yrial once again submits to the Chief’s orders and she’s imprisoned. The Strangers leave but Elena discovers that Yrial slipped a small piece of clay into the folds of her cloak — one that hads longitude and latitude coordinates on it. The Strangers realize that Yrial still needs their help and they swear to follow through on this clue.

Story-wise… some good moments, especially for Yrial. She was always my least-favorite member of the team and so any storyline set amongst her people were never my favorites. Even so, we have nice scenes for several different characters, though by this time I was beginning to feel that David was being defined by his sexuality, as opposed to having it just be a part of who he was. Again, I realize what Englehart was going for and applaud it but it’s still a bit cumbersome.

Steve Skroce, who would do some fine work at Marvel, fills in here on the latter half of the book and does a nice job. In fact, he does a passable imitation of Rick Hoberg — which may be attributable to Eldred on inks. Skroce draws a very fetching Electrocute, in particular.

The cover… I don’t like it. Several characters (like Candy) look stiff and weird and the colors on Yrial makes her fade into the background.

So we’re off and running on this ‘epic’ and we’ll have to see if it lives up to the billing.